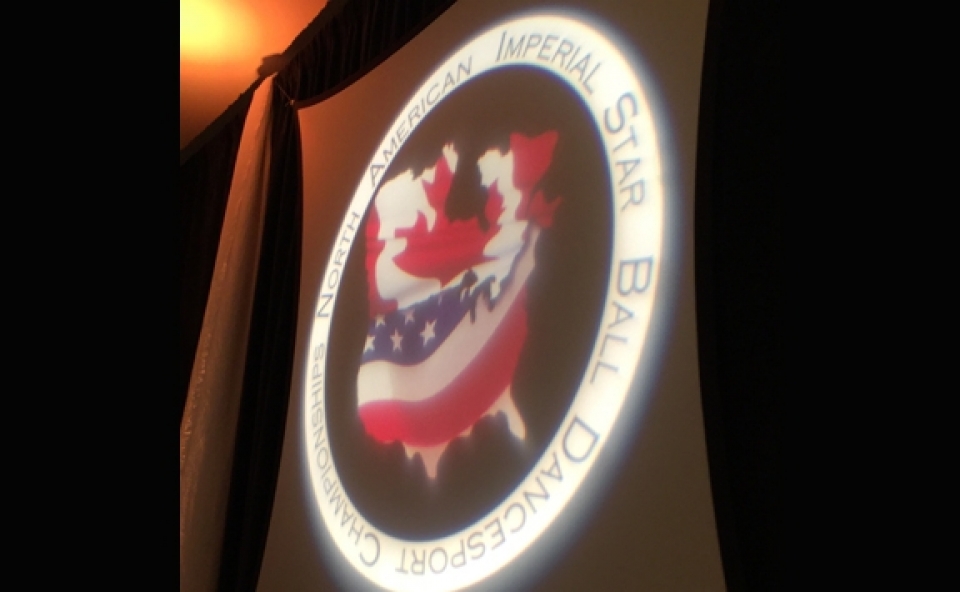 U.S dancers could be found in all corners of the country on Halloween weekend as 3 events were taking place in different parts of the country.  I was in Indiana attending the North American Imperial Star Ball which also hosted the finale of the Global Dancesport series.  Hosted by David Medeiros and Julie Stadler at the Sheraton Indianapolis at Keystone Crossing, the competition ran smoothly and in good spirit, thanks to the help of music director Rick Popp and Mark Brock using the opportunity to practice his karaoke styling.  The only place this weekend I am pretty sure where you could do an international VW to "We Are The Champion", original version!! 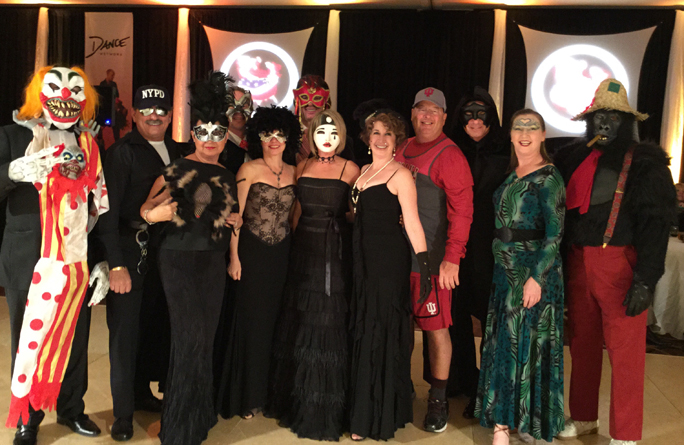 I would like to mention some of the pro/am competitors who were at the top of their game this weekend.

pen Smooth "A" went to Karen Jacob dancing with Christopher Spakding and the "B" to  Wendy Stambaugh dancing with Ben Ermis.

Open, Sophia D'Angelo dancing with Ilya Reyzin.  Sophia was also the recipient on top overall lady for the Global tour. 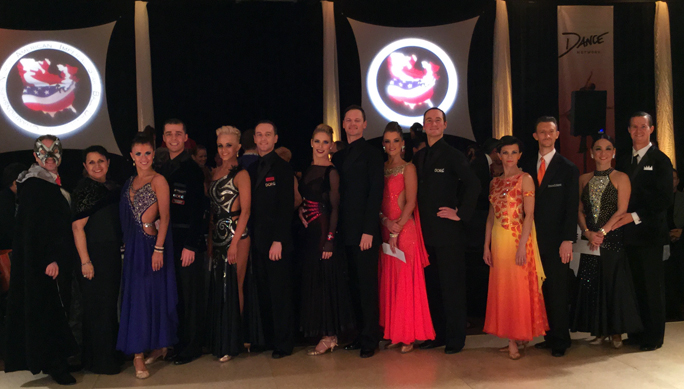 In the Pro category it was a very successful weekend for Roman Malkhasyan & Viktoriya Kleyman, they won the RS Rhythm and Smooth, the Open Rhythm and came in second to Adrian & Hannan Dydynsky in the Open Smooth.

The Open Ballroom winners in all dances were Michal Towliszew & Tiffany Fung followed by Pavel Cherdantsau& Svetlana Rudkovskaya who also won the Showdance.

Also a good show for Jason Rivers & Elisa Seja who won the RS Ballroom and came in 2nd in the RS Smooth.

The Open Latin went to Dmytro Kovalenko & Nina Kovalenko.
But none of these dancers were happier than Josh Tilford who was the overall recipient of the top teacher price for the Global tour taking home $10,000!

Congrats to all, and thank you to David and Julie. 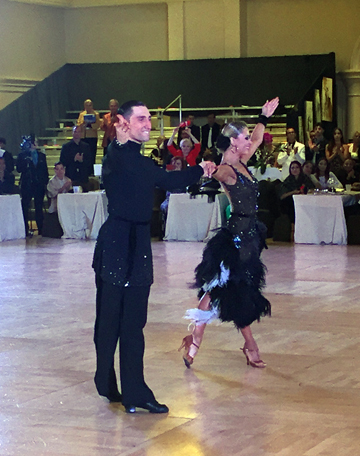 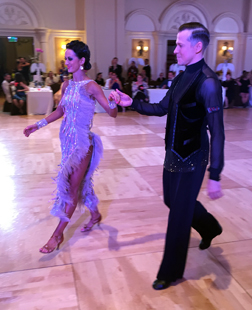 owned, and it was Nikolay Govorov & Eugeniya Tolstaya from Russia and they won all 10 dances. 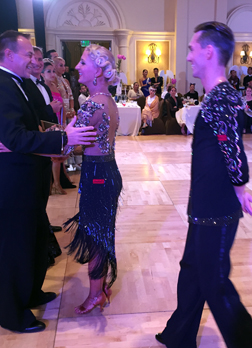 n fact we were a little surprised that Nikolay & Eugeniya won al the Latin section.

4th were Richard Still & Morgan Hemphill from England.  A second English couple although a name well known in the USA, Jonas Kazlauskas & Kathleen Ilo were 5th (8,7,5,4,5,5,5,5,4,5,5).  6th went to David Kiar & Lauren Andlovec from Australia.  They were 2nd in all the Ballroom but did not make any of the Latin finals.

There will be full reports in Dance Beat on this event soon. The other 3 professional events were run as supporting events.  The Smooth was a semifinal round and was won by Radek Wiatrowski & Denise Sobiewski.  It was quite close as they scored 1,1,2,3.  2nd went to Maksym Lototsky & Sarah Haworth and they were 2,3,1,1.  With 3,2,3,2, Shandor Shtefil & Aleksandra Barsukov were 3rd.  4th in all were Proper/Elliott, 5th in all Lange/Urosevic and 6th Klotzsche/Lee. In the Pro Ballroom Haritonov/Haritonova were the winners 1,1,2,2,2. Skriptsov/Skriptsova were 2nd although they won 3 dances 2,4,1,1,1.  3rd in all were Shelkovy/Shelkovy.  4th with 4,2,4,4,4 were Ishihara/Yokoyama.  5th in all Pavlovic/Barhatova.  Summers/Summers were 6th and Mader/Mader were 7th. This ended the 2105 Grand Nationals, and with the addition of this World Championship it was certainly “Grand” indeed!

Yesterday we began the WDC World 10-Dance Championship here at Grand Nationals.  On this first night the first round (quarter-final) of all 10 dances were held with the semifinals and finals taking place tonight.  USA is well-represented and our chances look good.  The defending champions from Germany retired this year, so the world title is wide open.  Check back tomorrow for the results. 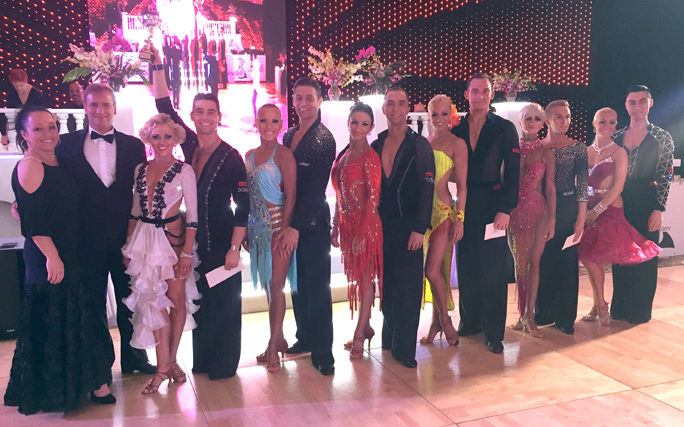 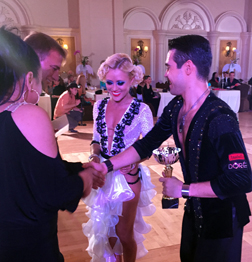 er featured events were the Professional Latin and Professional Rhythm.  The Rhythm was the larger of the 2, beginning with a semifinal.  Nazar Norov & Irina Kudryashova won all dances and did not lose a single 1st place mark.  It was a tighter race for 2nd but in the end Andrei Abrashin & Maria Gavrylova took it by 3 dances to 2 – 2,3,2,2,3.  3rd went to Shandor S 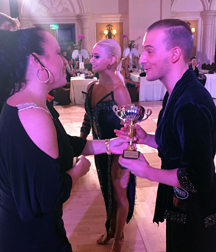 The Latin was a straight final but was a strong event.  The winners – again by 3 dances to 2, were Dmitry Nikishkin & Olena Shvets-Nikishkin 1,2,2,1,1.  The other half of this duel was Roman Italyankin & Aleksandra Bokova 2,1,1,2,2.  Obviously this was a close fight between these two as it often is in other events around the country.  3rd were Aleksey Alekseev & Ekaterina Derevleva 3,4,3,3,3.  We were impressed with 4th placed Stefan Ilies & Anna Tabolina 4,3,4,4,4.  5th in all dances were Kristian Sese & Mae Lozado and 6th were Victor Caneo & Valentina Delano. At night the pro-ams danced their open championships in Ballroom and Rhythm.  It was a good night for Lisa Lowery w/ Radek Wiatrowski who won the C division in both styles.  Miwa Rifu w/ Peter Minkov won the B Ballroom and Elaine Richardson w/ Linas Korieva won the Snr.  Janet Brutel w/ Michael Neil won the Snr. Rhythm and  Anna Trull w/ John Abrams won the B Rhythm.

Putting on the Ritz

Last night was the beginning of the Grand National Championships at the beautiful Ritz Carlton in Key Biscayne. 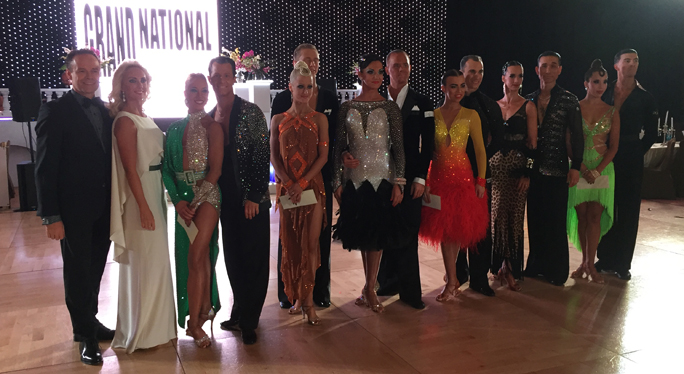 The afternoon was packed with Closed Rhythm dances and outside the ballroom it was all about the beautiful resort, beach and pool and we totally enjoyed ourselves in that department as well. Tomas Melnickski is a living testimony in that department and you can judge for yourself in the picture below