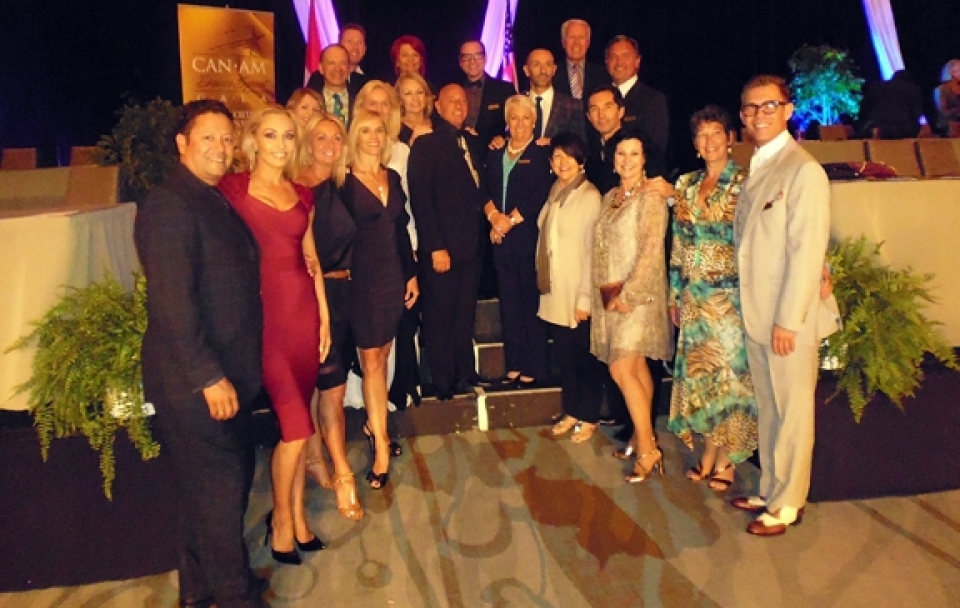 Can-Am Dancesport in Toronto Canada concluded last night with a terrific WDC World series Professional Latin event and all we can say is that Can-Am Dancesport is the Flagship of Dance Competitions with attention to detail and first class service from the Venue, the hotel, the meals and parties and even down to the flowers it was a first class Flagship experience. 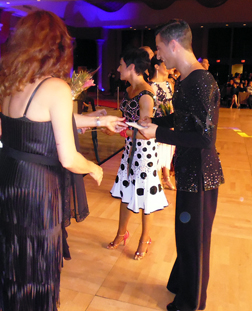 Professional WDC World Series was a six-couple final, and all couples were of good quality.  The first place was very close with the top two couples winning two dances and with it all left to the jive. The victorious couple in this intense fifth dance were Jean Philippe Milot & Laurence Bolduc from Quebec (1,1,2,2,1) they won the jive with 7 first place marks to 5 a full majority with 13 judges. Second place went to Kamil Studenny & Anna Pelypenko from Ontario (2,2,1,1,2), who looked obviously shocked by the result. We ourselves from the stands were slightly shocked since we too felt they could have easily won. In defense of the judges we did not think this was the best performance we have seen from Kamil & Anna, and so perhaps some of the judges might have been marking their performance rather than comparing, however, judging so many couples on the floor all at once leaves plenty of room for the judges to see only spontaneously what is happening on the floor.

The competition on top was fun but the couple that drew our attention the most was Ilya Maletin & Polina Maier who placed third overall (4,4,3,3,3).  They looked excellent and in a few dances and on some occasions we even felt they could have easily taken a dance.  We knew this to be an impossibility in our business but it was nice to see this couple be so sharp and improved. Fourth went to Rafael Piecyk & Betty Attia (3,3,4,4,4), fifth were Dmytro & Nina Kovalenko who were fifth in every dance and sixth in all were Eyal Glezna & Amanda Fleising. The biggest surprise to us was the little support that the professional WDC couples gave this event, you would have thought that with a world series in hand more would have turned up. 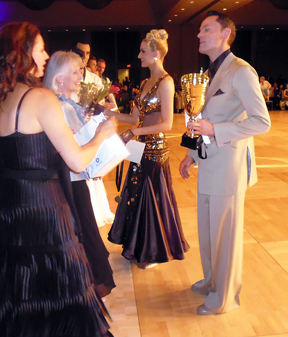 Professional Smooth was quite impressive with a semifinal round and here once again all couples were very capable. The talented duo of Travis & Jaimee Tuft gave an excellent performance, the best we have seen from this couple and they took all dances.  Kris Suakjian & Brianna Haft from California placed second in all dances also with a strong performance and Dmitry Ilyushenov & Kateryna Stytsenko from Canada were third in all dances.  It was great to see Smooth dancing being developed in Canada and to have such a terrific couple in this field. It was also great to see Vladimir Popov back on the floor but this time with Anastasia Kazmina (5,4,4,4). Vladimir continues to be an excellent dancer but the partnership needs further work to challenge for top placement.  It is a difficult transition from Ballroom dancing to Smooth but we are sure Anastasia will soon be totally up to par and ready to take the top on. Mark Igor Shpuntov & Crysta Gunn were fifth (4,5,5,6) and Dmytro Kuzmenko & Andrea Lynn were sixth (6,6,6,5). 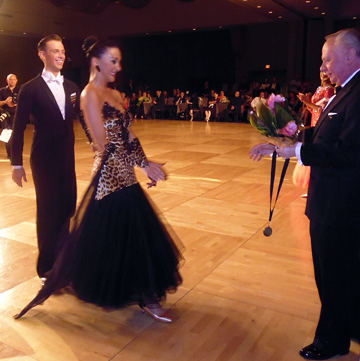 as also our first chance to see the new Canadian amateur partnership of James Cuttler & Virginie Primeau – they won all dances in the 3-couple Amateur Ballroom Championship.  2nd in all were Marciej Zieba & Lory-Eve Jacob and 3rd Alexandre Douradine & Arielle Jacob.

As is traditional now at the Can-Am, a special award achievement was announced and this time it went to former Canadian and World Champions, Alain Doucet & Anik Jolicoeur.  Alain & Anik performed a beautiful waltz proving that although retired now for some years – once you have it, you don’t lose it! 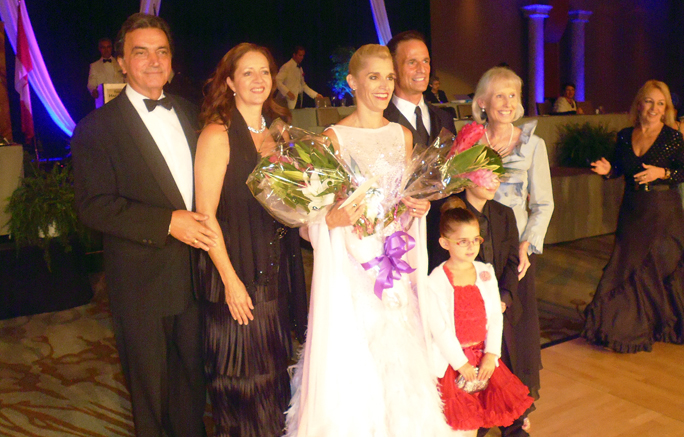 We want to say thanks to Ann Harding, Brigitt Mayer & John Karakis who most definitely pay attention to the details and are able to put together such a Flagship of an event!

This year for the first time the Can-Am Dancesport Championships are offering WDC World Series events in the Professional Ballroom and Latin. 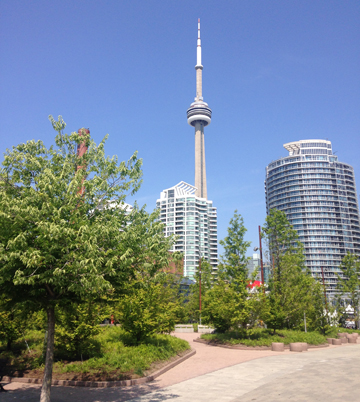 The Can-Am Dancesport Championships are once again under way at the spectacular Westin Harbour Castle Hotel, situated in downtown Toronto, Canada, right on the shores of Lake Ontario.  This facility offers a wonderful ballroom and many guest rooms with a lake view.  The lakefront features great cafes and restaurants for those who want to take in the scenery, and boat rides to the outlying islands are also available.

Unfortunately the WDC World Series Ballroom, that was held last night, did not not attract a huge entry.  In fact only 3 couples contested the division, but they were all of a high caliber and so the audience was delighted with some great dancing nevertheless.  Canadian Champions 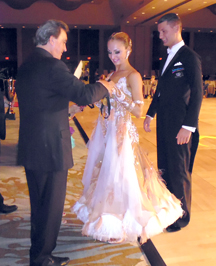 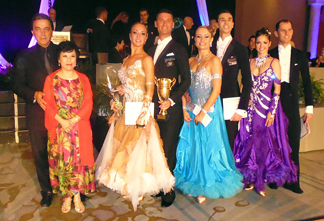 2nd in all 5 went to fellow Canadians, Richard Tonizzo & Claire Hansen.  USA took the 3rd spot in the persons of Anatoli & Irina Gorolevici.

6 couples entered the Professional Showdance and we enjoyed a large variety of styles and quality.  The two routines that could really be termed “Cabaret” finished 1st and 2nd.  Carlos Zapata & Dora Yaneva (Canada) were the winners with their effective “Exorcist” routine that recently won them 3rd spot at Blackpool.  2nd went to the comedy genius of Egor Shalvarov & Alla Profatilova (Canada) who, with their usual mix of whacky music and sound effects, transported us to the Wild West.  3rd with a more traditional “showdance” routine were Travis & Jaimee Tuft (USA) – their routine based on music from Pirates of the Caribbean.  4th fell to Kris Suakjian & Brianna Haft (USA);  5th to Viktor Tkachenko & Yuliya Lukina (USA) and 6th to Dmytro & Nina Kovalenko (USA). 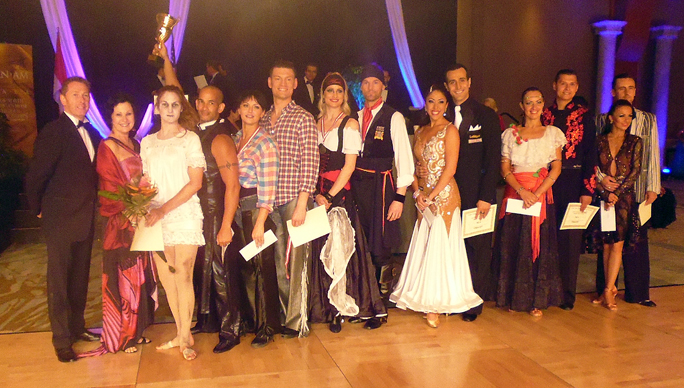 2 couples from Canada also finished on top of the Open American Rhythm.  1st place went to Boris Vdovine & Patricia Estay (1,1,2,2,1).  This is a new couple to us and they show great promise.  2nd once again were Egor & Alla with 2,2,3,1,3.  The winners of the Rising Star from the night before, Viktor & Yuliya, took 3rd 3,3,1,3,2.  Dayan Mantecon Roldan & Kyra Kalweit (Canada) were 4th in all dances, Michael Zepada & Kimberley Turner (USA) were 5th in all and Mathieu Casavant & Melanie Martin (Canada) were 6th. 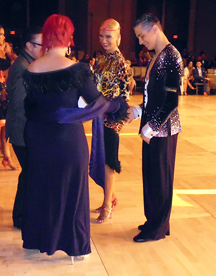 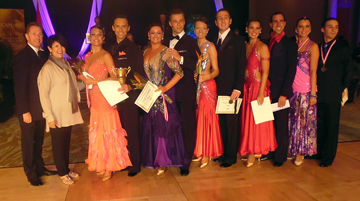 Thursday night, Dmitry Ilyushenov & Kateryna Stytsenko (Canada) won all dances in the Rising Star Smooth.  This was the first time we have seen them in this style and we think they could really cause a stir on the N. American scene.  Dmytro & Nina Kovalenko won the Rising Star Latin, 1,2,1,1,1.