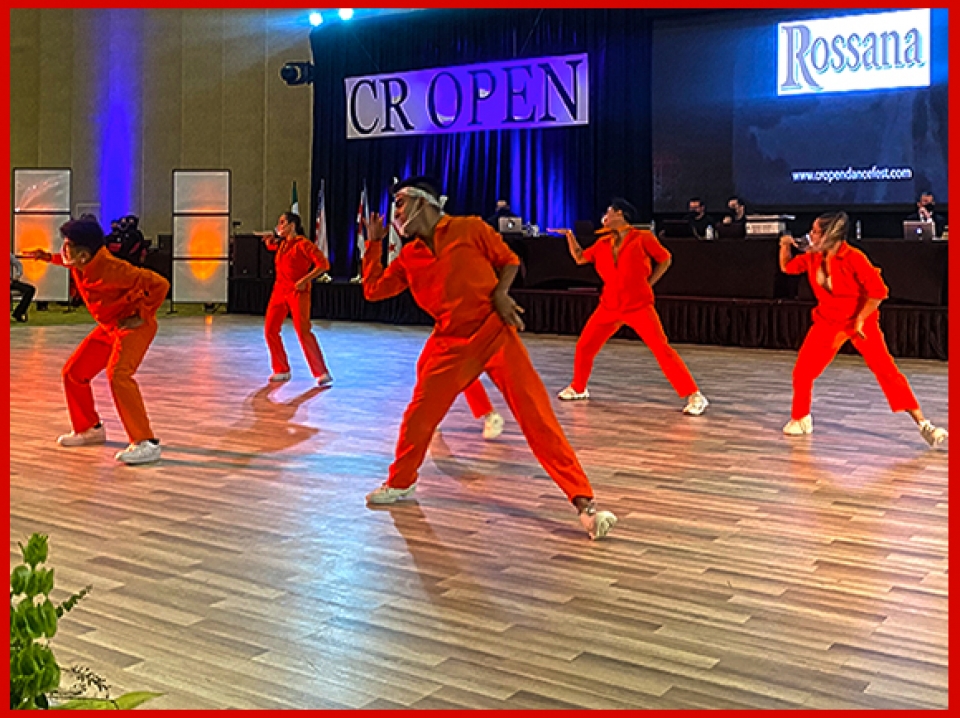 For Costa Ricans “Pura Vida” means “pure life” and like “aloha” it is an expression commonly used by them, to say thank you, hello or goodbye.

For us it is a human expression of how Costa Ricans treat life, living every moment and enjoying every breath, and this was fully demonstrated by their passion for dance this and every year here at the Costa Rican Open.

View the embedded image gallery online at:
https://www.dancebeat.com/m-blogs-en/item/1976-cropen21#sigProId8d138577fc
Last year, due to the pandemic, the Costa Rican Open had to be presented virtually but this year using some covid restrictions the organizer, Ms. Sabrina Fuchs, decided to do it live, for this she needed to run two ballrooms and limit the spectators as well as to make sure everyone was masked and well separated to minimize the spread of the pandemic. This was a very difficult task, running around making sure the separated seats stayed at a certain distance and were not moved from start to finish, also making sure that no two people were seated on the same seat. Perhaps the hardest task was to make sure the dancers, if more than two on the floor, all wore their mask throughout their performance. Lucky for all of us, the majority of the people were very cooperative and yes they needed to be reminded from time to time about their distance but for the most part everyone obeyed the rules, set up by the convention center and by the health department of San Juan, Costa Rica.
View the embedded image gallery online at:
https://www.dancebeat.com/m-blogs-en/item/1976-cropen21#sigProId3ad52f303a
The event has doubled since we last reported on it, attracting over 1,500 competitors from across North, South and Central America but the dancing was still magnificent as ever. We saw people competing in all the styles of dancing from Ballroom to Jazz, Ballet, Contemporary, and even Hip Hop, not one style of dancing was missing from the program and that even included Flamenco, Tap and Folkloric. In the style of “Pura Vida” in the Costa Rican Open no one gets left behind. For example, if you want to do Latin dancing you can dance all the dances by yourself meaning without a partner and this included the professional division. All dancers were judged on their technical merit, and charisma. Of course, you could also dance with a partner (male or female), a small group or large group. They likewise have pro/am in all categories including in the small groups and the large groups, nearly every combination you can imagine is done, so no matter your circumstances you got to dance “Pura Vida.”
View the embedded image gallery online at:
https://www.dancebeat.com/m-blogs-en/item/1976-cropen21#sigProIddcc60ec8d5
The event was held once again in one of the most up to date convention centers I have ever seen and had it not been for the many restrictions the health department put in place to protect the couples and the attendees, the ballrooms would have been packed full. This year’s prize presentations were not as usual. There were no lineups, everyone came one at a time to pick up their prize and if you were part of a group only the team leader or coach was allowed to come pick up their award.
View the embedded image gallery online at:
https://www.dancebeat.com/m-blogs-en/item/1976-cropen21#sigProId8c52b99e82
Although for us the main interest was in the ballroom categories, the hip hop competitions were amazing and this year Ms. Fuch incorporated the “Best of the Best.” In the group segments the competition was fierce with some amazing routines. The singles division was not left behind and one after another the best of all from folklore dancing to modern dance went up for the honor of being the “best of the best” and in this category we must also report that hip hop took the prize with a simple, heartfelt, and clever hip hop routine that brought the house down, to the point that even though there were not as many audience as there could have been, the ballroom still roared even through the mask that everyone had to wear.
View the embedded image gallery online at:
https://www.dancebeat.com/m-blogs-en/item/1976-cropen21#sigProIda02d96397b
This was once again an amazing event and one that has turned from a competition to a dance festival. We most tip our hat to the organizer, Ms. Sabrina Fuchs, once again who through her efforts continues to put Costa Rica on the map when it comes to dance around the world. Also a huge congratulations and thanks to the team that worked so hard to keep us all in line and safe throughout this terrific weekend of dance!