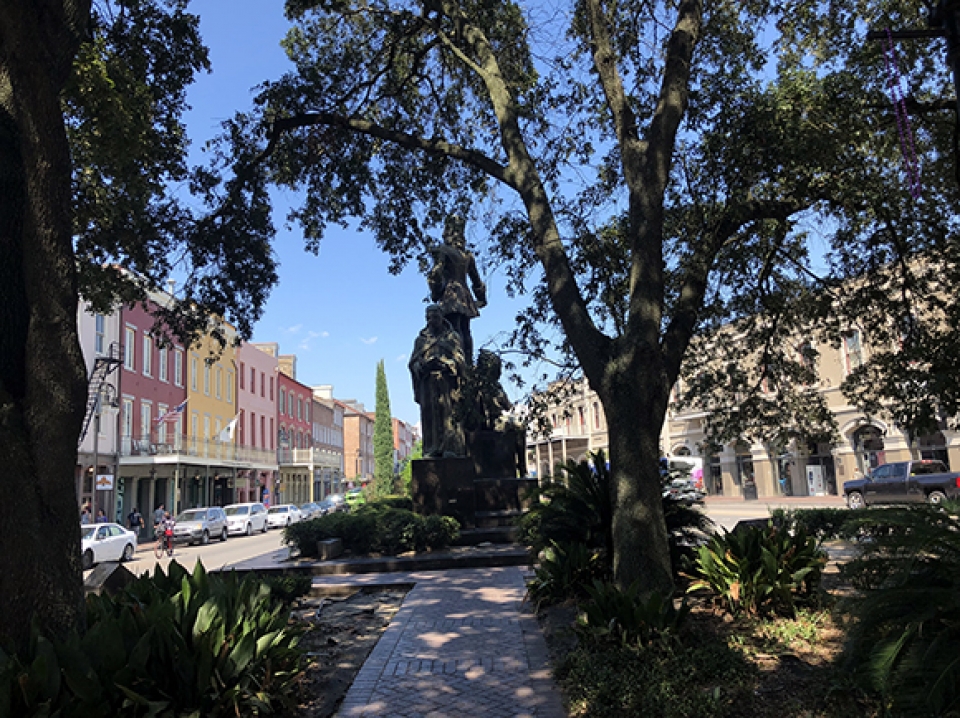 Last night was the conclusion of the Ultimate Dance Challenge in New Orleans, LA.

And it sure ended with a bang where people danced until they dropped, it was nearly two in the morning when the DJ played the last tune. On this night we also had some excellent professional challenges to the delight of the audience who totally participated all night long.

It is not always you get an invitation to New Orleans the birthplace of Jazz, where music is everything and where party time is all the time. New Orleans and ballroom dancing go together, music makes us all dance and it certainly makes us all happy and in this historical city. Everywhere you go you can hear great music to dance to. It was great to spend whatever time we had off to walk around the city sightseeing, eating or listening to some great bands, it totally made this a competition you could never say no to, when asked to officiate.

View the embedded image gallery online at:
https://www.dancebeat.com/m-blogs-en/item/1802-udc2019#sigProId9984996d7a
As in many competitions across the USA, the Professional Smooth had the most attendance on the last night and this was won by Aaron Stowell & Brie Hofreiter who placed first overall 2,1,1,1. We have not seen this couple around very often but they sure came out fighting from the first note of music, perhaps at times a little too hard making them look like they were pushing and shoving especially in the first two dances. Second overall was awarded to Marcio DeSouza & Saori Kamiya who won the waltz but placed second in the other three dances. They perhaps lacked a little of the power of the last couple mentioned. Third was awarded to Justin Seigler & Malinee Noreen and they took third in all dances and fourth in all was Ryan Jackson & Ellie Grohoske.
View the embedded image gallery online at:
https://www.dancebeat.com/m-blogs-en/item/1802-udc2019#sigProIde2b4f1890a
The Open Professional Cabaret was also a feature on this night here the win went to Jamie Black & Samantha Elliott who almost took perfect scores with their Cabaret routine, only Chris Johnston awarded them second place in their routine, the rest of the judges awarded them first. Second went to another excellent cabaret number and this was Gerard Gore & Ellie Grohoske, and third went to a showdance couple Kirill Nestscetraev & Aleksandra Antonenko, fourth was also another Latin Showdance couple and that was Simone Spadoni & Simona Caporale. We have to say that on this night the Cabaret routines had an edge over the showdance routines in difficulty and in appeal.
View the embedded image gallery online at:
https://www.dancebeat.com/m-blogs-en/item/1802-udc2019#sigProIdcd710c72c9
The Professional American Rhythm went to Andrew Escolme & Amy Baker who won two dances with perfect scores and swing, bolero and mambo with a majority of first and just one judge abstaining from giving them first, in the swing Carlos Pabon, and in the bolero and mambo Gary Pierce. We have to say that on this outing we loved their energy, but unfortunately unlike in the US Nationals where they won the US National Professional Rising Star Rhythm, they were pushing a little too hard, especially Andrew who got Amy a little off her base a couple of times. This might have been noticed by a couple of the judges but it certainly was not by the audience who was seduced by their skill form start to finish. Second in this heat went to Israel Borges & Natalie Cardenas and they took second in all dances, and third was Danny Whitmer & Sarah Hooks who placed third.
View the embedded image gallery online at:
https://www.dancebeat.com/m-blogs-en/item/1802-udc2019#sigProIdef3d90889e
The Open Professional Latin was a complete repeat of the night before in the rising star and here Kirill Netsvetraev & Aleksandra Antonenko took fist overall 1,1,1,2,2. This couple were quite skilled but from our side we were just happy that he did not leave once to take someone’s water, pour it on the floor and step in it, it was nice to see that Kirill actually has the skill to stop himself with the strength of his feet and legs and not rely on any substance to keep himself on balance. Second overall was awarded to Simone Sadomi & Simona Caporale 2,2,2,1,1.
View the embedded image gallery online at:
https://www.dancebeat.com/m-blogs-en/item/1802-udc2019#sigProId4ac226194a
There was also a Professional Challenge of Champions run at the end of the night for the champions to earn extra money and this went to Jaime Black & Samantha Elliott who won the Cabaret. We have to tip our hats to Jaime & Samantha who did their solo Cabaret number two times within an hour. What stamina and body power! Congratulations to them, we most also point out that they won this challenge with a majority of firsts from the judges. Andrew Escolme & Amy Baker the Rhythm Champions took second and third went to Kirill Netsvetraev & Aleksandra Antonenko who were the Latin Champions.

Congratulations to the organizers Chuck Danza and David Elkin who did an excellent job of keeping us entertained for these three days of competition dancing.